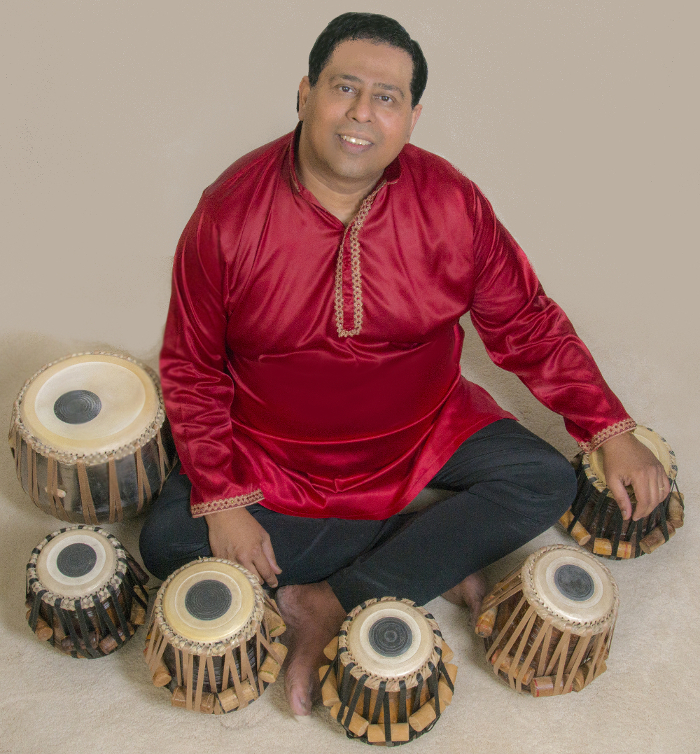 In his college days at William & Mary, Indian-American composer and tabla drums percussionist Broto Roy (an EMI-India recording artist) began composing and recording a genre of music he calls "Raga-Jazz", an amalgam of ancient Indian ragas (melodies), talas (rhythms) and western Jazz and classical. His mastery over the complex, formalized rhythms of his native India combined with his deep appreciation and understanding of the Jazz idiom led the Washington Post to declare his music "spiritual and visceral". He was Artist in Residence at the Kennedy Center's inauguration of their Millennium Stage. His CD "Total Immersion" is only the second live recording sanctioned by the Kennedy Center for public release (the first was by Pavarotti). Broto's debut CD "American Raga" was played aboard the International Space Station when Dennis Tito carried it with him as he orbited the earth. His Broto Roy Quartet , consisting of sitar, tabla drums, sax/flute and electric bass released "All Barriers Fall" in May 2018 and "Ancient Algorithms" in 2015.

Indian-born American Broto Roy is an EMI-India recording artist who comes from a prominent musical family from Kolkata, West Bengal India where his great-grandfather Rajanikanto was one of India's greatest songwriters and his uncle Dilip had a career as a popular singing star. From the early age of six Broto began his study of Indian classical music with "tabla" (Indian hand drum percussion). Until the age of 16 he continued to study from legendary drum maestro Bidyut Banerjee the theory and technique of classical percussion which is a systematic science of sound - "ragas" and "talas". At the age of 16, Broto moved to the US where he studied music composition and graduated with a B.A. from the College of William & Mary in Virginia. Over the years he has had a flourishing musical career performing widely and producing many CDs. Using western Jazz and classical forms in his compositions and merging them with his Bengali musical heritage, Broto Roy has made his music a metaphor for immigrant identity and multiculturalism. This successful joining of the Indian tradition of "ragas" and "talas" with the technical dazzle of guitar, sax, piano and drums produces a magical fusion of East and West. Today, hailed as a "fusioneer extraordinaire" who propels tradition while retaining its essence, Broto has carved out a vibrant multicultural presence on the international stage performing in the US, European Union, North Africa and India.

For the last three decades, Broto Roy has performed extensively and produced eight CDs, the latest two are his all new, original compositions: "All Barriers Fall" (2018 Buzkhashi Records) preceded by "Ancient Algorithms" including variations on J.S. Bach, jazz and "ragas" from the 16th century. Writing for sitar, guitar, piano, drums and tabla percussion he fuses into an original, magical hybrid his two main loves - jazz and east Indian "ragas" as well as other styles. With worldwide CD sales, Broto is at home in the world, having performed in Berlin, Germany; Stockholm, Sweden; New York; Kolkata, India; Essouira, Morocco; Washington, DC, and Beverly Hills. He also has the unique distinction of being heard in outer space. While in orbit around earth in May of '01, space tourist Dennis Tito played Broto's first CD "American Raga" aboard the one and only International Space Station.

The great American museum of Washington DC, the Smithsonian, described him as "the young South Asian percussionist Broto Roy, an accomplished navigator of a range of multi-directional pathways between East and West...not only to a new range of aesthetic references, but also to new instruments and performance styles as well. After appearing in America, Europe and India with the folk group Ganga, with major classical Indian musicians and with the jazz-based East-West Ensemble, Roy continues exploring new rhythmic embellishments and ideas" - Freer and Sackler Museum of Asian Art at the Smithsonian Institution.

Broto's first release in the US was with guitarist Sanjay Mishra - on the CD "The Crossing". Also, along with his parents and sister he formed the ensemble "GANGA", named after the Indian holy river Ganges. They performed the traditional songs and music from Bengal, India. An American and European tour with performances in Stockholm, Berlin, and Bremen Germany followed. From 2000 onwards Broto began performing at festivals with his own group featuring his own original compositions from his debut album "American Raga" Buzkhashi 001 which many musicians claim as an important influence. After three more years Broto released "Total Immersion - Live at the Kennedy Center" Buzkhashi 002; under his indie label Buzkhashi. Beginning in summer 2002, Broto toured his own trio in support of the CD and audiences were enthralled by the linking of subtle Indian rhythms and Indian singing with elements of Balinese; South American; Renaissance polyphony and Be-bop. His third CD "Live at the Lowell Festival" Buzkhashi 003 (near Boston, USA) was released in 2003 by the Broto Roy Trio featuring the great Indian "sarodist" (Indian bass-lute) Aashish Khan and violinist Shashi Dhar. His Bengali folk ensemble GANGA released their CD "Setting Down Roots" in '08 Buzkhashi BR005. In 2011 GANGA released "Bringing It Home" Buzkhashi 006 , a compilation of live tracks from their concerts at the Library of Congress' Coolidge auditorium; the Metropolitan Museum of Modern Art (New York City); Festival of American Folklife (July 4th) and many others. EMI-India re-released "American Raga" with worldwide distribution by Virgin Records in '09. His recently released (May 2015) CD "Ancient Algorithms" is his 7th and is original compositions Buzkhashi 007 further exploring world fusion with Indian classical music, jazz and he continues to expand his embrace of all kinds of music.

As a dedicated teacher on the side, Broto also performs with his students. See tabla concerto video with students at The Kennedy Center. He received the Virginia Foundation for the Humanities grant to teach in 2005 and taught in the DC public schools for three years as part of the Levine School's program for underserved students in DC. His numerous college performances, both for general audiences and music conservatories feature an educational component highlighting the rich history and science of Indian classical music theory and its modern practice. Some US college concerts have been Sussex College, New Jersey; Mount Holyoke, MA; Colgate University, NY; Yale University, CT; University of South Carolina at Columbia; State University of New York at Syracuse and Oswego; and eight campuses of Pennsylvania State University from Erie to Pittsburgh. On November 14, 2013 Broto lectured on India and performed at Harrisburg College, Pennsylvania and on January 9, 2014 he delivered a lecture on Indian culture and religion at University College at the University of Maryland. The National Endowment for the Arts has awarded Broto two teaching grants in 1986 and 1993.

Summer festival performances with his jazz fusion ensemble include Montpelier Jazz Festival (10/5/12); National Folk Festival, Michigan USA; Festival of India; Festival of American Folklife; Kerrville Festival, Texas and many others. Guest performances live and on CDs include guitarists Fareed Haque (of Garaj Mahal fame), Sanjay Mishra (Jerry Garcia); renowned jazz guitarist Paul Bollenback; organist Joey DeFrancesco; saxophonist Ron Holloway; sarodist Aashish Khan; sitarists Krishna Bhatt, Subrata Roy Chowdhury, Indrajit Roy Chowdhury, and Grateful Dead member Bob Weir (with the Sanjay Mishra Band) and many more. June 23rd and 25th, 2011 he performed at the Festival Musiques du Monde a Essaouira in the kingdom of Morocco. In 2011 for the 10th anniversary of September 11th, he played at the Washington National Cathedral's "Concert to Heal" in Washington DC. Broto is particularly proud of composing the song "Let Us Fly" for the Art & Drama Therapy Institute of Washington, DC 's disabled and mentally handicapped clients. CNN World News broadcast the premiere of "Let Us Fly" and said his was "a story of determination to be heard and recognized" and called him "Grammy bound". See CNN & NBC coverage. He was nominated in the Instrumental category by his fellow DC musicians for the 2012 WAMMIE (Washington Area Music Awards).

Along with his study of western orchestration, composition of his world symphony is continuing.